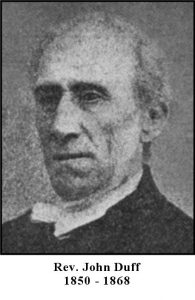 John Duff was born in Kennoway, Fifeshire, Scotland in 1806. He was educated for the ministry at the University of St. Andrews and the Divinity Hall of the United Secession Church. He was ordained in 1836 in Newart Hill, Lanarkshire, and “the congregation there being satisfied of the suitableness of his gifts and graces for their instruction and edification, called him to be their pastor.”

He laboured there for seven years, “applying himself with all diligence to the study of the word, for, from the beginning, he was careful in his pulpit preparations, considering it presumption to attempt to serve the Lord with that which cost him nothing”

John married Elizabeth Rutherford in 1837, and they raised eight children.

From Newart Hill Rev. Duff served in Dalry, Ayrshire for six years. Then “in response to appeals from Canada he resolved to make this his field of labour.” He was initially inducted to the charge of a congregation in Vaughn, which also served Albion, both in the Presbytery of Toronto. When the new frame church was built in Elora, called Knox Presbyterian, he was called to serve, and was inducted October 23, 1850. He ministered there until 1868, when he retired from active ministry and spent his time in farming. He had also ministered to the preaching station of Alma, on a part time basis, from 1850-1866.

Reverend Duff celebrated his jubilee anniversary as an ordained minister in 1886 in the new brick building (which we have been led to believe was built in part by William Brander, a bricklayer from Scotland). William’s son Archibald married Reverend Duff’s daughter Jane Elizabeth, and thus our connection to the Duff family.

Back to “About” page